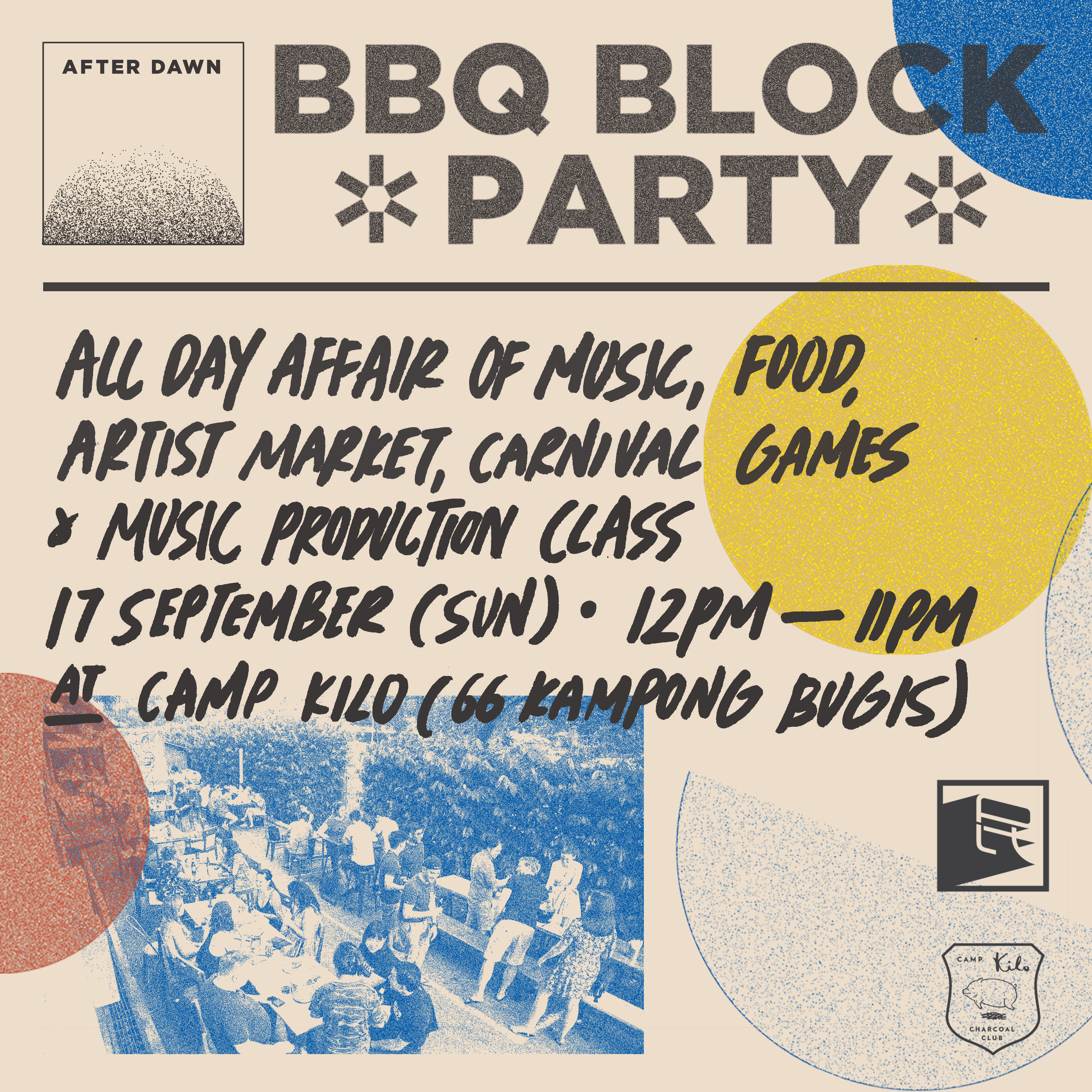 Put on your Sunday best and get your shades ready! After Dawn BBQ Block Party returns to the riverside for another round of daytime dancing to beats by our local DJs, fun & games at the carnival stalls, along with engaging workshops and an artist market featuring independent brands.

*all transactions made at the market via CASH only

WORKSHOPS
> MUSIC PRODUCTION CLASS WITH Oliver Osborne
He released his first track on London indie label Kitsch & Sync in 2012, and has been putting out tracks ever since, releasing on Singapore based Eclesia, Paris based Jays Records, and Toni Ramos’s Madrid based imprint, Dolce Music, and of course a series of releases on his own label ETTF Music, as well as remixes for Canada’s Fine Grind Audio, and Dan Buri’s Neverest Records.

In the last year, his tracks have received high level attention with Keine Musik head honcho &ME, veteran Stefano Noferini and Stefano Ritteri playing his tracks, as well as plenty of support from Asia-based DJs.

Having played and recorded with various bands during his late teens and early 20s, Oliver Osborne is versed in both analog and digital recording. He plays guitar, bass guitar, and drums, as well as knowing his way around the digital side of things.

Join him upstairs at Kilo Kallang from 1-4pm to learn more about production techniques, demystifying the creative process, boxing clever with your workflow, and how you can master the art of music making, even on public transport.

CARNIVAL GAMES
>CARNIVAL Games by The Social Co. SG
*all proceeds from the carnival games will go towards https://pledgeitforward.sg/charities/ which has chosen a list of 52 charities to channel the proceeds to. For more information on the initiative, contact info@thesocialco.sg

>BEER PONG COMPETITION!
Who is down for beer pong?! We have a competition for the best of 10! Seek out a member of staff when you get down to sign up for your shot to be the kings and/or queens of the table. The games commence at 5pm! The winner will be in for a treat, all you have to do is join to find out more 😉

Sign ups on a first-come-first-served basis at the venue.

—
HISTORY
It all began one Friday night in May in 2013, within an industrial building on Kampong Bugis road, when the spontaneous desire to bring good vibes, good people and good tunes together birthed the first ever After Dark pop-up party. The unexpected turnout at its first conception buzzed with so much energy that it fuelled the drive to create subsequent After Dark pop-ups. With its home base at Kilo Lounge, After Dark soon left its mark at several other locations around the island, and amassing a steady following in the process. It’s music-centric essence soon evolved to merge other concepts such as art and food to elevate the experience of the After Dark events for their followers, and thus After Dawn emerged as its daytime incarnation.
—