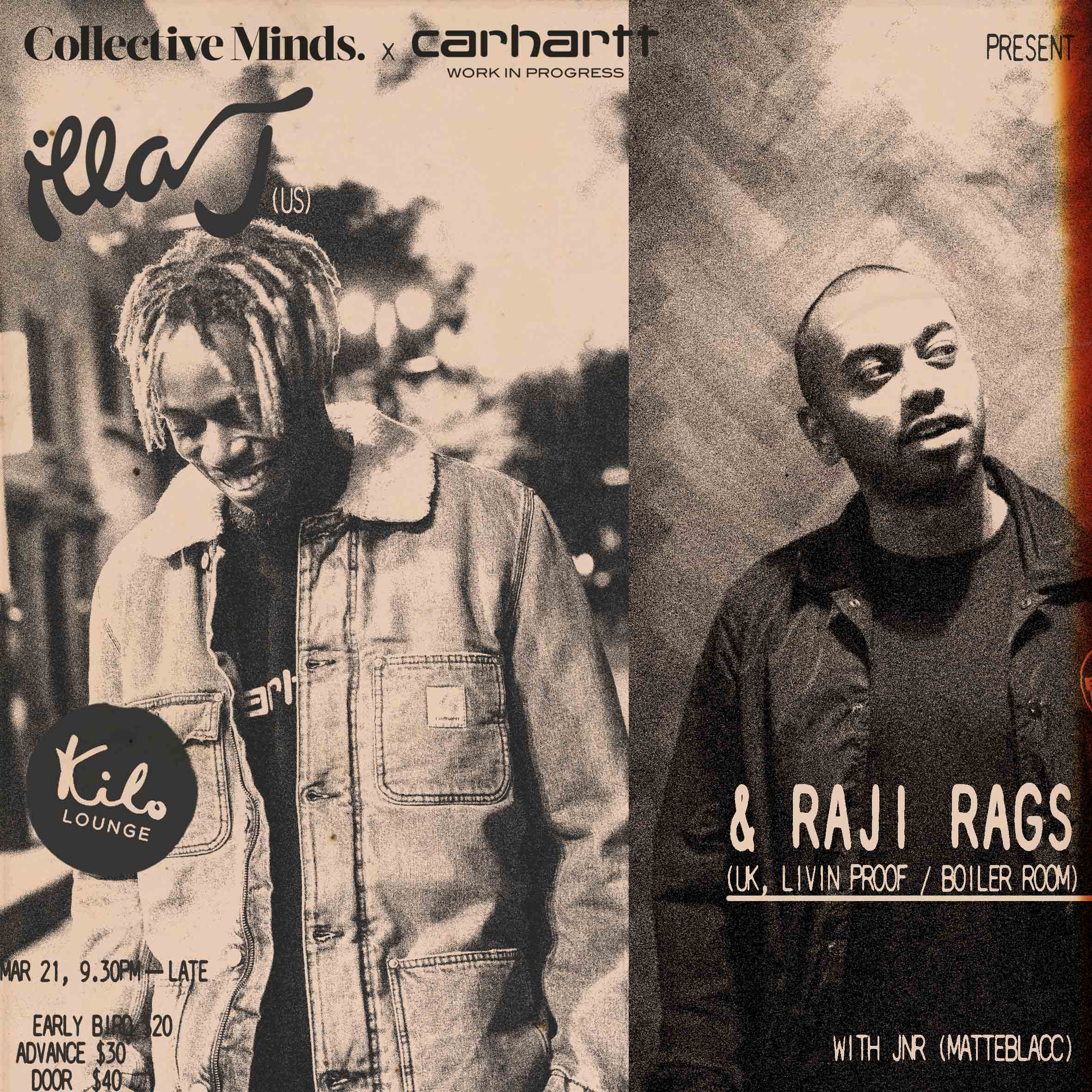 If you’re into insanely smooth delivery of vocals and bars, look no further! We’re excited to announce that Illa J will perform live at Kilo Lounge on March 21. Illa J’s current music career may have been destiny. He happens to be the younger brother of the late J Dilla, legendary hip-hop producer extraordinaire. After J Dilla passed away in 2006, he dropped out of university to focus on music and the rest is history.

It keeps getting better! Special guest DJ Rags, former Head of Music for Boiler Room and co-founder of Livin’ Proof as well as local legend Tirso (Matteblacc) will both perform DJ sets on the night!

We’re thrilled to have so many hugely influential and talented artists all in one place for what’s going to be a special night at Kilo Lounge.

Illa J was exposed to music at a very early age from his parent’s acapella jazz group training and rehearsals in their living room to his brother making beats in the basement of their house. His father was a ghost writer for Motown Records and his mother a classically trained opera singer.

Active in the music industry since 2006 in LA and Detroit, Illa J has released 3 solo albums via Delicious Vinyl, Bastard Jazz, and Jakarta Records. He is now gearing to release his fourth solo album via German record label Jakarta Records with Calvin Valentines on the production. He has also released two group albums, two solo mixtape, and two group mixtape.

Since his first tour in 2007 in Europe with Aloe Blacc, Exile, 7 House Shoes, he has toured worldwide multiple times in the US, Canada, South America, Europe, & Asia. He has been a guest on SiriusXM’s Sway In The Morning, Toca Tuesdays and on HOT97’s Real Late Show with Peter Rosenberg. Also has been featured & has had reviews from Pitchfork, NPR, Stereogum, Hypetrak, The Source, Mass Appeal, Okay Player, and many more.

His most recent collaborations has been with jazz legend and grammy award winner, Robert
Glasper in concert and on record for Glasper’s Miles Davis tribute project “Everything’s
Beautiful” released via SONY Legacy in May 2016.

A Londoner through and through, Raji Rags is an integral part of the London music scene. Raj has a unique style of DJing that effortlessly and seamlessly travels a huge range of music but specialises in hip-hop. He is co-founder and DJ of Livin’ Proof – London’s biggest and most well known hip-hop party that were the first to bring A$AP Rocky, Danny Brown, and Flatbush Zombies to the UK, as well as hosting early parties with the likes of Hudson Mohawke, Just Blaze, A$AP Ferg, Schoolboy Q, Action Bronson, Joey Badass and a raft of other acts.

As well as being a well-known DJ in London with his residency on NTS Radio which he has held since the radio station started, but has also travelled the world DJing in places such as Cairo, Paris, Tokyo, Hong Kong, New York, Los Angeles, Rio de Janeiro, Milan, Recife, Delhi.

Hailing from Toronto, JNR credits his love for music to the weekly trips to the record shop at the local mall with his dad and siblings at a ripe young age of 5. Older cousins with regular basement parties also had a huge part in inspiring him to DJ. In Singapore since 1998, he has been purveying his brand of soul-inspired feel-good music whenever he plays, whether its at a bar, daytime party, festival, club or a pop-up warehouse party. He can be found helming the decks each weekend at Lulu’s Lounge and occasionally at Tanjong Beach Club, Super Loco on Wednesdays, and Uptown Thursdays at Kilo Lounge.