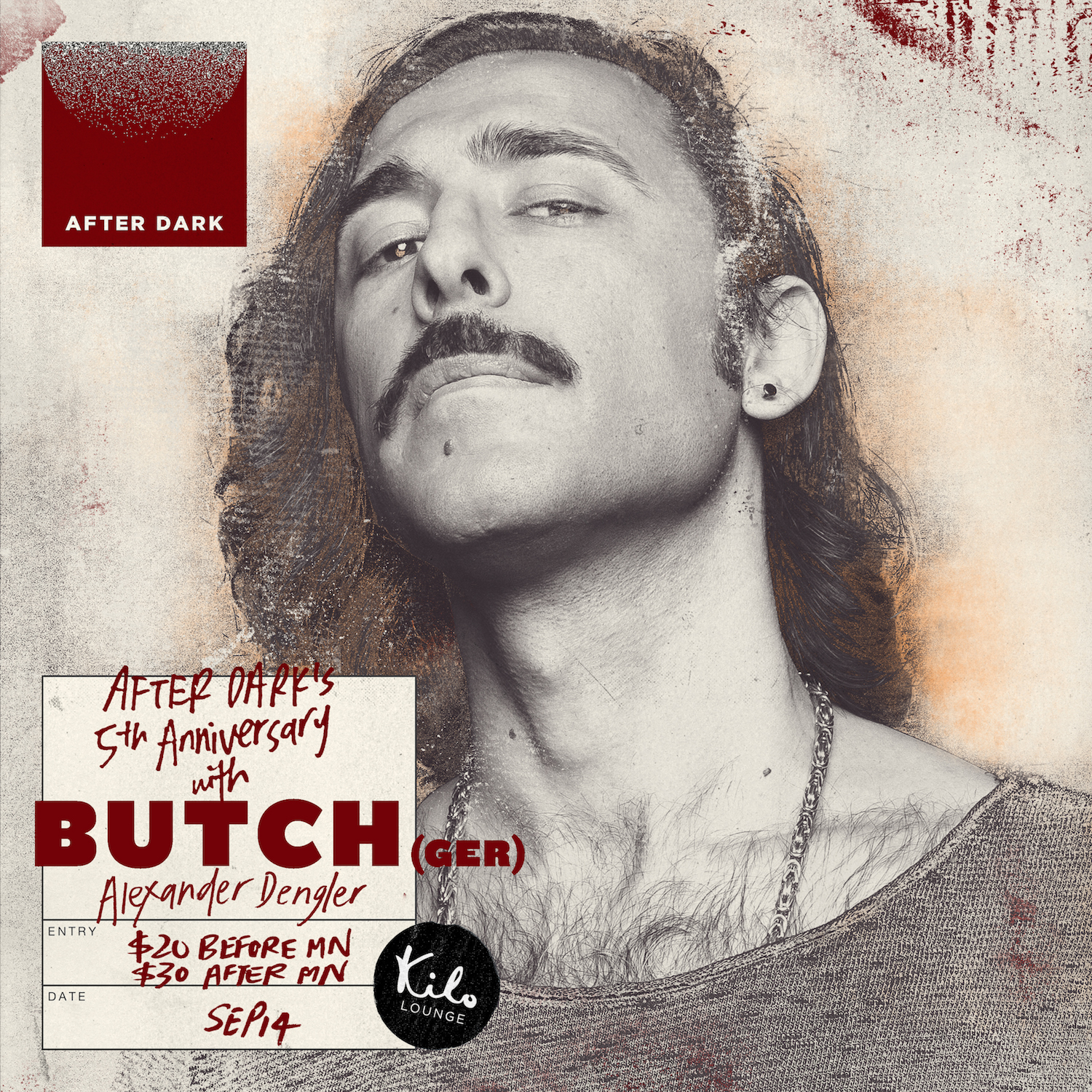 AFTER DARK’S 5TH ANNIVERSARY
with BUTCH & Alexander Dengler
Cover | $20 before midnight, $30 after midnight

Butch, aka Bülent Gürler isn’t a man interested in playing into one musical community. Born and raised in Germany’s Mainz, his foray into music began aged 11 when he witnessed a DMC championship final on TV. From then on Bülent pursued “Breakdancing, graffiti, then DJing. I stuck with DJing as it seemed to be the one I was good at.” Apparently so: succession of DJ competitions later and Bülent was a local club resident
by 2002, touring as far as Japan by 2005. By 2008 Butch’s production had synced with his DJing, following a similar route of “Trip hop, some cheesy harder techno then this kind of house and techno crossover”.

That same year saw Butch commit to making collaborations a major part of his output – a trend he’s continued to this day. A vinyl release on Envy My Music saw Butch collaborating with fellow emergent artist Julie Marghilano on Last Tango, a release on Great Stuff saw a hook up with Amir with Set it Off and just months later in 2009 Area Remote released From Above as a joint effort between Butch & Virginia. Subsequent collaborations have included Riva Starr, Johnny D and “a whole load of others I forgot to officially add my name to.” Small wonder then that the list of labels Butch has worked with is equally extensive, including Moon Harbour, Visionquest, Hot Creations, Desolat, Watergate, Rekids and others. As of 2016 Butch has added to
that list with a release on Seth Troxler’s Tuskagee imprint titled Jack Your Body. Despite the extensive discography however, he regards himself outwardly at least as more of a DJ than a producer. “It’s probably fifty-fifty. When I first started touring promoters were surprised a producer could actually DJ. That’s normal now, but I want to keep that element – of surprising people with sets, not just extensive releases.”

Small wonder then, that Butch has played as far afield as the US, Korea, Spain, the Czech Republic, Switzerland and the UK, in the first part of 2016 alone. It’s this constant drive to deliver on the dancefloor as much as on the mixdowns that sees Butch embark on a blaze of activity in 2016. His own label, Otherside, launches this year with a debut EP featuring himself and Ricardo Villalobos. In tandem, Butch is launching a residency series titled Down The Rabbit Hole launching later this year at Watergate Berlin. Oh, and he’s got a vinyl only release confirmed on Drumcode. In a world where positioning, strategic bookings, branding and personal image are increasingly as important as the music itself, Butch, aka Bülent Gürler refuses to conform. The name means nothing – because he’s not here to dazzle or intimidate, he’s here to play.

The recommended https://thevantasticlife.com/order-alprazolam-online/ initial dose for patients with anxiety is 0.25ml–0.5 mg three times per day.The dose may be increased to achieve a maximum therapeutic effect, at intervals of 3 to 4 days, to a maximum daily dose of 4 mg, given in divided doses.The lowest possible effective dose should be used and the need for continued treatment reassessed as often as possible. The risk of addiction may increase with dose and duration of treatment.