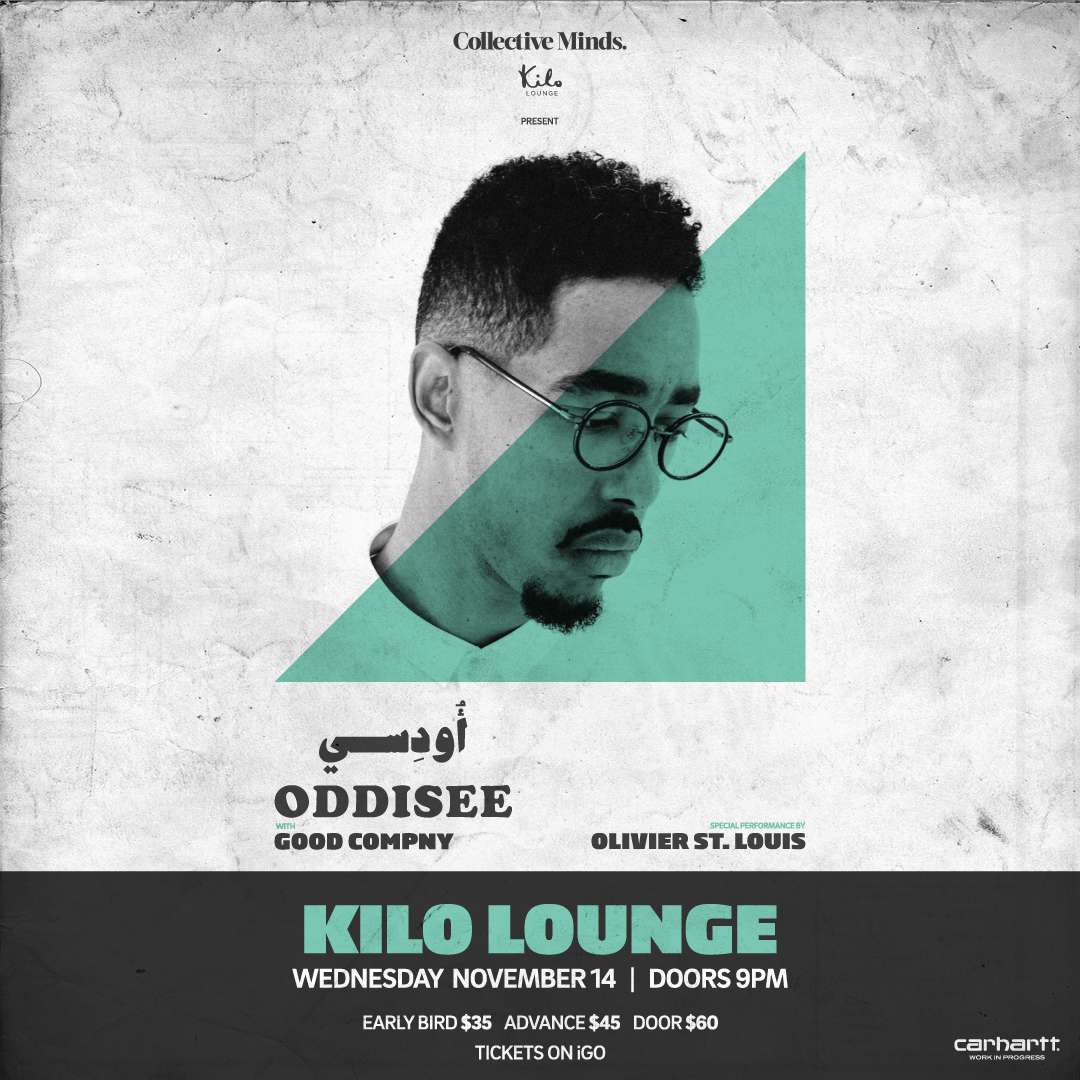 The son of Sudanese and American parents, Oddisee was born and raised in Washington DC, spending hot summers in Khartoum learning Arabic and swimming in the Nile. Oddisee took his first steps as an MC producer in the analog basement studio of his legendary neighbor, Garry Shider (Parliament Funkadelic) and has since performed hundreds of shows around the globe.

We got another epic night at Kilo Lounge lined up with Oddisee plus a special performance from Olivier St. Louis.

The son of Sudanese and American parents, Amir Mohamed was born and raised in the United States capital city of Washington DC, spending hot summers in Khartoum learning Arabic and swimming in the Nile. Growing up amidst the sounds of New York hip hop, his father playing Oud, Go-Go, and gospel, Amir took his first steps as an MC producer in the analog basement studio of his legendary neighbor, Garry Shider (Parliament Funkadelic).

Convincing his entrepreneurial father that he too had business acumen, Amir laid the check from his first commercial release on the kitchen table before his 21st birthday and never looked back. Though Oddisee has gone on to perform with The Roots, produce for Jazzy Jeff, Little Brother, & De La Soul, form the critically acclaimed group Diamond District with fellow Washingtonians X.O. and yU, and become a world renown musician.

His work has been featured on the Facebook Series Humans of New York, in countless films, television ads for everything from snowboards to bicycles, and even at Google’s product unveiling. In 2017 he performed at over 110 shows around the globe with his band Good Compny in support of his album “The Iceberg.” He has been featured almost everywhere from Time Magazine and USA Today to Pitchfork and Rolling Stone.

Known in the music industry for his independence, Oddisee consistently debunks the scatterbrained artist myth – doing everything from booking international tours to photography to marketing and promoting himself and even other artists. He has been signed with Mello Music Group since 2008.

Olivier was born in Washington DC of Haitian and Cameroon heritage, but spent most of his childhood studying in the remote countryside of the UK. His boarding school experience not only developed his appreciation for other cultures but musically he grew-up hearing beyond the excepted genres of a kid from the Nation’s Capital. At age 15 Olivier’s CD and sometimes cassette collection would range from hip hop, RnB to Garage and British Rock.

Olivier remained in the UK and completed a Bio Science Degree in Oxford but couldn’t suppress his real passion for music. After graduation, he began a ‘Jekyll and Hyde’ life. A scientist by day; recording artist by night.

In 2006 he released his first album titled “kilowatt”, which put the artist known as ‘Olivier Daysoul’ on the map within the
underground electro-hip-hop scene. Simultaneously, Olivier began receiving numerous requests from producers to feature as a vocalist.

He went on to receive significant international attention for his work as a featured singer/songwriter. This momentum pushed Olivier in 2010 to take the leap and pursue music full time. He worked and toured worldwide with various artists including Hudson Mohawke, Oddisee, the C2C Dj’s, Laura Mvula, AnnenMayKantereit and many more. Despite all of this, Olivier felt something was missing…A true reflection of his own voice and sound.

A hiatus from feature recordings and some deep introspection found Olivier discovering his love for blues, rock and funk.
Many late-night guitar sessions resulted in new soundscapes. A new chapter was opening. The former ‘Daysoul’ moniker exchanged for his original birth name ‘St. Louis’. Producing and writing all his own music and playing his own instrumentation; Olivier St. Louis was embarking on a new road.

Contraindications to Accutane include pregnancy, breast feeding, allergy to isotretinoin the main active ingredient and use of tetracyclines. Patients with liver/kidney failure, pancreatitis and hypervitaminosis must not take oral Roaccutane. https://knowledgewebcasts.com/online-accutane-clean-face/ should be taken with caution for various chronic intoxications.

After a successful UK Tour with Laura Mvula, Germany’s most prolific band at the moment, AnnenMayKantereit and 130 worldwide shows with Washington D.C. producer/MC Oddisee right after that, he is now working on his debut LP which is set to release in 2018.

When asked his thoughts on his artistry he states:
“no punches pulled …no compromises … just me”.