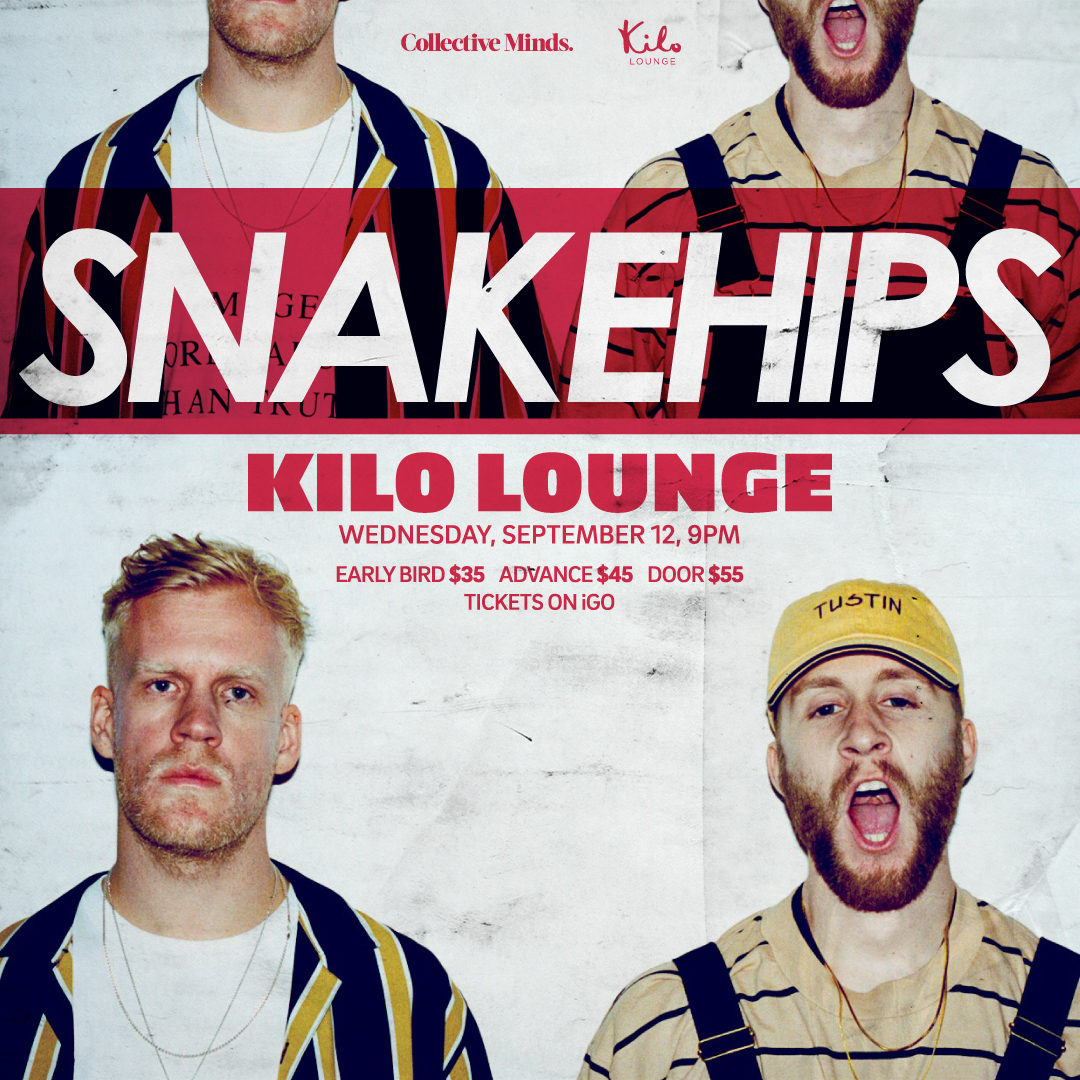 Collective Minds and Kilo Lounge are thrilled to announce that Snakehips are coming to SIngapore!

Described by Billboard as, “Fusing suave R&B with synth-pop to great effect”, Snakehips continue to garner plaudits worldwide and have worked with the likes of Chance the Rapper, Tinashe Anderson Paak and The Weekend.

Expect another epic weeknight out at KIlo Lounge on Wednesday, Sept 12.

Gaining momentum with the lush and sultry ‘On & On’, featuring George Maple, the single caught the attention of BBC Radio 1 ’s Zane Lowe, Annie Mac, Mistajam and Monki . On & On ’s soulful blend of retro and modern became Snakehips ’ trademark and was further refined on dreamy single ‘ Days With You’ , featuring Sinead Harnett. First meeting on a business trip to Hong Kong, the duo went on to release their 4-track EP ‘Forever (Pt II)’, featuring several talented vocalists including Londoner Kaleem Taylor, Syd, singer-songwriter Sasha Keable and Daniella T.A.O.L.

Launching into 2015 mega-hit ‘All My Friends’; featuring Tinashe and Chance The Rapper, the production has amassed well over 300 million plays, winning them an Ivor Novello (‘Best Contemporary Song’) and later going Gold in 7 countries, and Platinum in 9.

With James and Ollie both playing a huge part in the creative direction of Snakehips’ musical journey, the pair have recently been involved in video construction, creating a wealth of memorable productions, including 2017’s MØ collaboration ‘Don’t Leave ’ (Gold in 5 countries, Platinum in 3) and summer anthem ‘Either Way ’, featuring Joey Bada$$ and BRIT-Award nominee, Anne-Marie. Notably, all releases come through Snakehips’ own label Hoffman West, named after a fictional character Ollie created to get into clubs for free.

Now with James residing in the sepia setting of LA, and Ollie based in London, the duo have found sonic inspiration in both their homeland, and the sun-soaked state; with their recent ‘STAY HOME TAPES’ EP serving as an aural embodiment of their LA/LDN influences. The cross-atlantic duo have recently surpassed 1 Billion streams across all platforms, proving that distance has only made them stronger.

Having previously collaborated with American rapper Anderson Paak on ‘Money on Me,’ and Zayn on the huge 2016 production ‘Cruel’ (Platinum in 2 countries), James & Ollie list acts list Aaliyah and SWV as their musical influences. “We’re suckers for anything with cool soul samples and old drum beats,” says James . “But we’re also influenced by living in London. We borrow from the past to make music for the future.”

Having performed at huge worldwide festivals such as Glastonbury, Bestival, and Lollapalooza, as well as two performances on Jimmy Kimmel Live, and 5 sold out North American Tours, the pair also delivered a rousing performance at Coachella 2018, with surprise guest appearances from Tinashe & Jay Prince. Described by Billboard as, “Fusing suave R&B with synth-pop to great effect”, Snakehips continue to garner plaudits worldwide, with the Guardian adding: “We didn’t dream them up. They’re actually happening.” Having just released their remix of Khalid & Normani’ s soulful ballad ‘Love Lies’, the pair will play a series of date this summer, with performances scheduled at the likes of Sasquatch! Music Festival, Bonanza Campout, and Bonnaroo Music & Arts Fest.