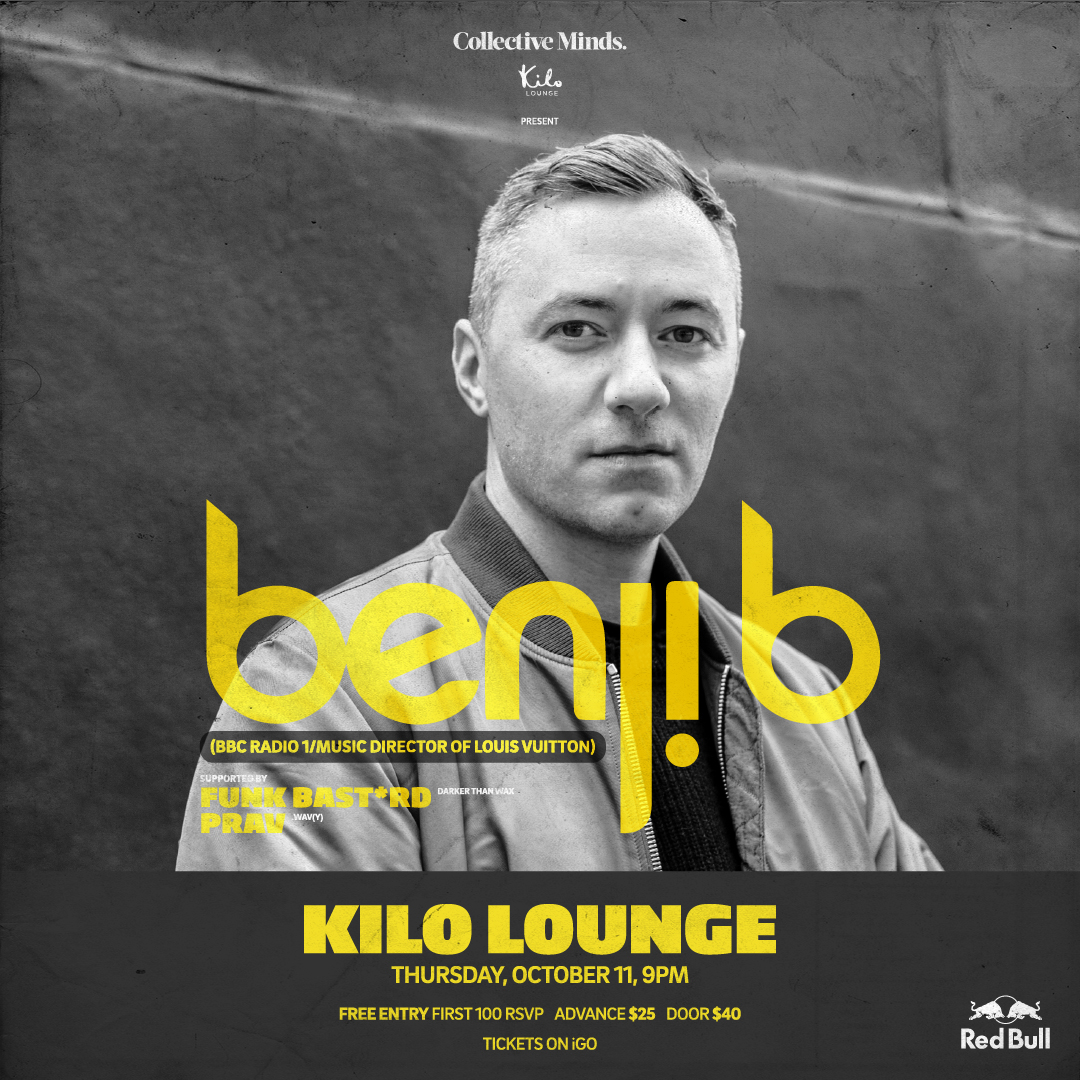 Recently appointed by Virgil Abloh as Louis Vuitton’s music director, Abloh’s admiration for the UK tastemaker and DJ is clear, having once described him as the “Anna Wintour of music.” The OFF-WHITE designer has been a regular listener of Benji’s BBC radio show — renowned for its forward-thinking electronic and hip-hop playlists.

Benji is recognised by music and fashion followers alike for his work with some of the most important brands and artists of our time such as Kanye West on both ‘Yeezus’ and ‘The Life of Pablo’. We’re incredibly excited to have Benji B in Singapore for what’s guaranteed to be an electric night at Kilo Lounge alongside Red Bull and local favourite Funk Bast*rd (Darker Than Wax) and P R A V of .Wav(y)!

Many people know Benji B as a radio host—his BBC Radio 1 slot is firmly established as one of the most important shows in the world right now. But he’s also one of the UK’s most respected DJs, one whose distinctive tastes have been shaped by one place more than any other: London. Coming of age in a city teeming with record shops, radio stations and clubs, Benji was a regular at just about any seminal party you care to mention, from Metalheadz and Aba Shanti at Blue Note to Speed at the Mars Bar, and from Gilles Peterson’s That’s How It Is at Bar Rumba through to Jah Shaka’s speaker-rattling affairs and the crucial FWD>> and Co-Op nights at Plastic People. UK club and soundsystem culture is not Benji’s sole influence—he’s spent hours soaking up the vibe of New York parties like Body & Soul, for example—but it’s London that defines him.

As a DJ, Benji cut his teeth making mixtapes on his mother’s HiFi system, using its chunky buttons to mix cassettes, records and the radio. These days, he’s recognized for his varied and mature selections. He has a natural ear for rhythm and an innate sense of musicality, playing music with groove, whether it’s classic house and techno or the best of the new stuff. His appreciation of dance music is lived, not learned—his time on the dance floor, plus his peerless knowledge of four decades’ worth of music, makes him a formidable proposition behind the decks.

Benji’s formative experiences in London led to him starting the Deviation night in 2007. At these parties, which began at Gramophone in East London, it wasn’t about who was in the DJ booth, it was who was on the dance floor. The likes of James Blake, Kode9, Floating Points, Oneman, Zinc, Benga and Katy B would come to dance and hang out with a new generation of clued-up club kids. Deviation moved from Gramophone to other venues, including fabric and XOYO. It was at XOYO where Kanye West once famously popped in to a Deviation night while Kassem Mosse was playing. (Benji is a trusted Kanye confidant and collaborator: he’s credited as a musical consultant on Yeezus, with a co-production credit for “On Sight.”)

Deviation was created, Benji says, to give something back to a city that’s given him so much. The party became a torch-bearer for London clubbing, bringing acts like Moodymann and Flying Lotus together on same lineup—the kind of curation that’s common now but was ground-breaking at the time. In the past 14 years, Deviation has been an incubator for talent, a party where you’ll know there’s going to be great sound, interesting DJs and an attentive, open-minded crowd.

Deviation was the physical manifestation of Benji’s BBC 1Xtra radio show, which ran from 2002 through 2010. Radio is in Benji’s DNA. He’s been in a live radio studio environment once a week, every week, since he was 16, but his fascination with the medium dates back to when he’d tape the weekly top 40 shows as a five-year-old. For years he listened and and learned from the likes of John Peel, Janice Long, David Rodigan, Tim Westwood, Colin Dale, Pete Tong and Gilles Peterson, plus scores of pirate radio DJs, and, from further afield, New York City radio kings Stretch and Bobbito.

He listened to house, boogie, disco, soul, hip-hop, electro, breakbeat, jungle and drum & bass—anything with a groove. This led to a 16-year-old Benji producing Gilles Peterson’s show on Kiss; the two formed a tight bond, and the show, which would become known as Worldwide, became a product of their musical debates.

Benji went on to forge his own radio identify, first on BBC 1Xtra, and then, since 2002, on Radio 1. His show holds a space at the bleeding edge of new sounds and scenes, championing post-Dilla beatsmiths like Flying Lotus and Dorian Concept before they were household names, while also earning a reputation as a great place to hear non-conventional house tempo music. The list of guests speaks to the esteem in which Benji is held: Mike Banks, A$AP Rocky, Shackleton, Thom Yorke, MF Doom, Photek and many, many more. And after all these years, the airwaves still crackle with Benji’s passion for music. For him, radio is much more than a practical source of learning about music: it’s an artform.

Co-founder of the prolific net label Darker Than Wax, the Funk Bast*rd has been tirelessly pushing and promoting an alternative expression of leftfield music through his widely eclectic, genre-bending sets. It is no surprise when one hears his musical selection which traverses between a huge variety of musical genres, be it deep jazz, soul, funk, boogie, brazilian grooves, house, hip hop, bass and the most forward sounding beats.
His unique sets have taken him around cities like Tokyo, Paris, London, Switzerland, Saigon and Jakarta , and has played alongside the likes of Dam Funk, Pearson Sound, Iron Curtis, Jamie XX, Mike Huckaby, Joakim, Arttu, just to name a few. His unique flow has earned him praises from selectors like Dam Funk, Recloose. Tama Sumo and Jamie XX just to name a few. Most recently, he was invited up to play at Club Shelter in Shanghai, as part of a Darker Than Wax & SVBKVLT collaborative party.

On the festival side, the credentials run high too, as he was one of the few locally chosen selectors to have played in Gilles Peterson’s Worldwide Festival in Singapore. His Cosa Nostra project has equally been impressive, with their tracks charted on 22tracks Belguim, various radio shows and online platforms. Now with the label in place boasting of 22 global artists, things look set to evolve even bigger.
The Funk Bast*rd always has something in the box that surprises. Just open dem ears.

Inspired by the new futuristic way of describing something in a positive connotation, popularized by Harlem rapper, Max B, .Wav(y) signifies the best music selections championed by sneakerheads, streetwear enthusiasts and a new age Hip Hop audience. Expect to get turnt with some soulful bass heavy music, bangin’ 808’s and good vibes all night long.