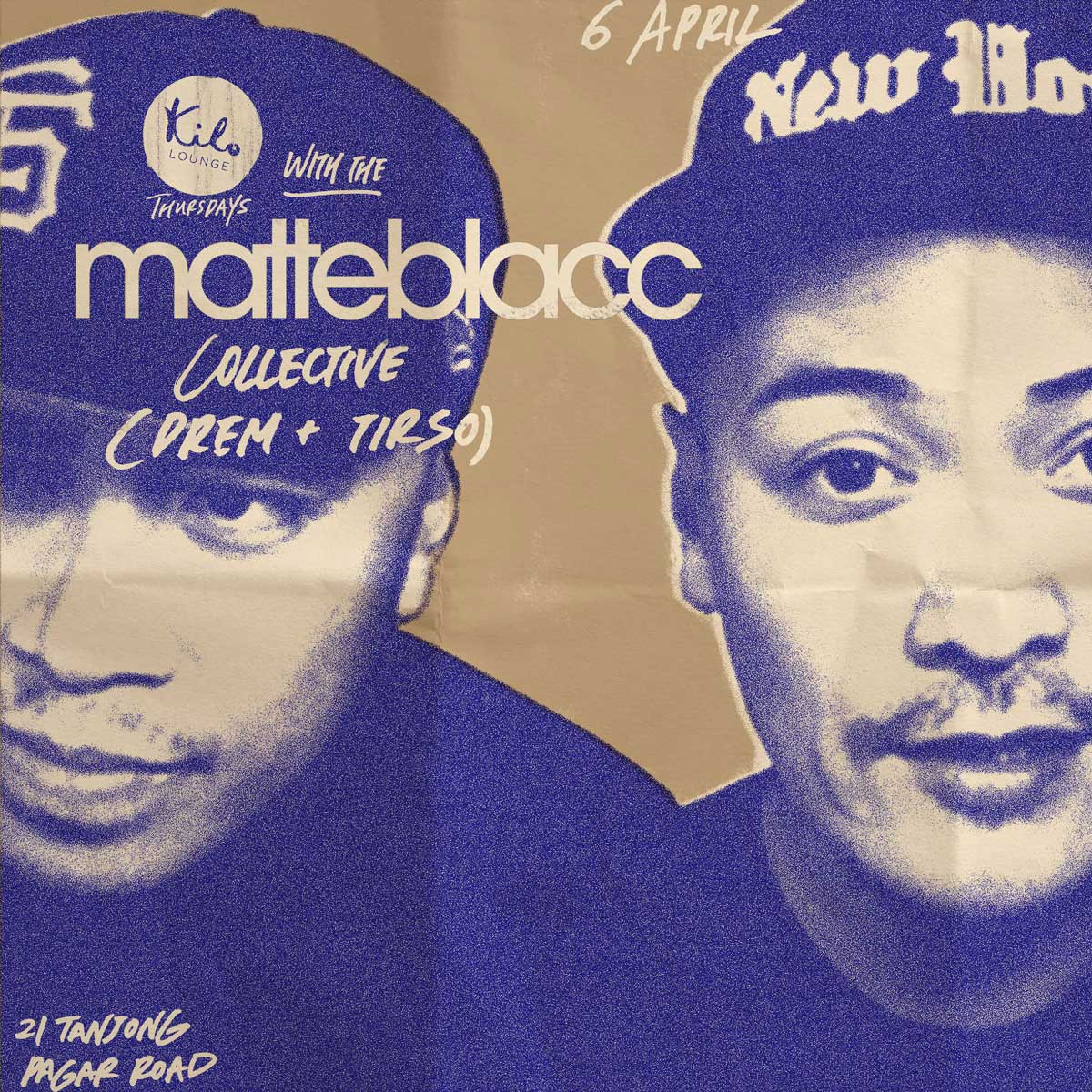 While both have played supporting or individual DJ sets at the new Kilo Lounge, the head honchos of Matteblacc have yet to make their collective debut. Come Thursday 6th April, they are going to do just that. While blurring the lines between genres, JNR and DREM are guaranteed to make the room bump to their signature sound.

The Matteblacc crew aim to shape the music soundscape in Singapore with their unique brand of soul inspired music. The minds behind this collective are it’s head Djs – JNR and Drem. Other members include Arms, XG (aka Garuda), Jay Jamero, Mylk, PaulSilver and Intrigue.

Having made their mark with notable past residencies that include Amoeba, Cocco Latte, The Butter Factory, Ku De Ta, il Lido, Mimolette, Kinki and Velvet Underground / Zouk, they are now highly sought after in the Singapore scene and South East Asia.

Matteblacc has a penchant for classic Boom Bap, Hip-Hop Soul, R&B, Neo Soul, Future Beats, Rare Breaks, Funk, Soul, Boogie, Dancehall and House. And as one of few outfits that champion quality soul inspired music, they have been instrumental in the movement back to better music in the night life scene. Working closely with other like-minded collectives like Pushin’On / Sideshow, Bedsty, Good Times, Darker Than Wax, CHROAM and collabs with DopeSG / Richtclicka in their series of “Secret Pop-up Parties” – they work hard to maintain a high standard without going pop.

They have also brought iconic Hip Hop events to Singapore (2014) with Summerdaze at the Hard Rock Hotel Pool, which featured Neil Armstrong (5th Platoon) & Shortkut (Invisibl Skratch Piklz/Triple Threat Djs/SF) along with a host of local stalwarts. In 2015 they upped the ante and brought in Fat Joe, Slum Village, Arrested Development and Triple Threat Djs to the Summerdaze stage. Summerdaze 2017 saw them go back to the old school with a series of block parties, the first of which featured Skratch Bastid. In 2012, in collaboration with Heavy Boogie and presented by adidas Originals they brought to Singapore the unforgettable “Breathe And Stop” Tour featuring DJs – Ali Shaheed Muhammad (A Tribe Called Quest/Lucy Pearl), Shortkut (ISP/Beat Junkies/Triple Threat), and Maseo (De La Soul). The follow up event, “Laced Up!” featured 3 of the world’s most critically acclaimed DJs Tony Touch (Rocksteady Crew/NYC), Apollo (Invisibl Skratch Piklz/Triple Threat Djs/SF) and Vinroc (5th Platoon/Triple Threat DJs/SF).