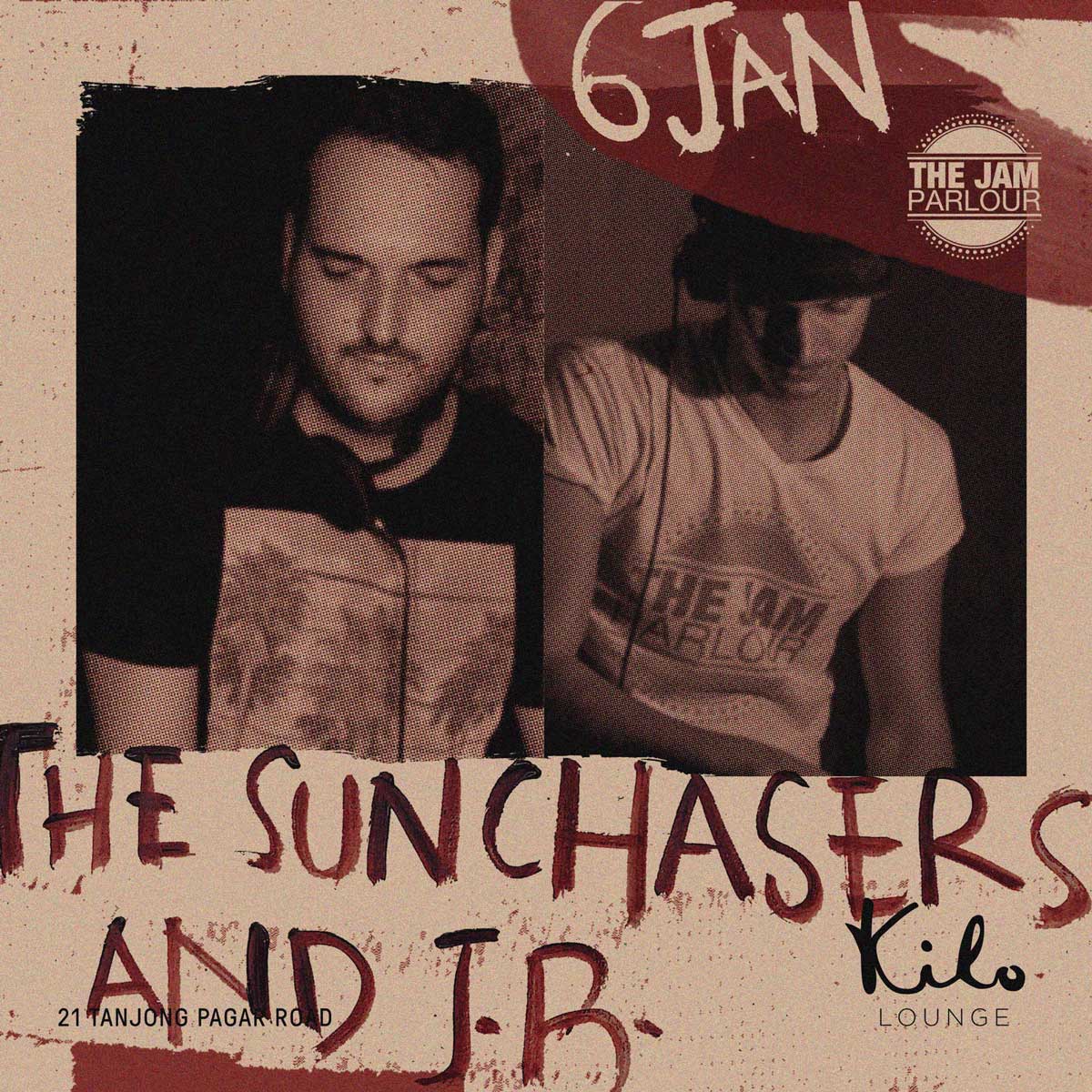 When one sun sets another rises, this is the fuel and force behind the creativity of The Sunchasers. From lavish sunkissed beats to sun-soaked colourful melodies, this is the sound that The Sunchasers portray. With many influences taken from around the world like “The Deep” blue oceans to the pure fine white sands, The Sunchasers’ unique style of big room house grooves are truly “Algo Hermoso”.

With fantastic support from influential music lovers across the globe, The Sunchasers love nothing more than to spread the peace and harmony that the sunshine brings.
https://www.facebook.com/thesunchasers/

The JAM PARLOUR
From its humble beginnings back in 2011, The Jam Parlour series has grown steadily to become 5 years later a respected night that won its credentials from the community. Privileging quality over quantity, the philosophy has always been to work with the right people and the right venue but also to never compromise on the music, even if that meant having some hiatus at some point. Since 2015, The Jam Parlour has found the best home at Kilo Lounge and it is a real pleasure to collaborate again with their fantastic crew following the successful nights we had at the former Lounge.

The Jam Parlour began with a simple idea really: give more exposure to underground DJs/collectives whether they be local or from overseas. Our little island holds many underrated gems but unfortunately with a bare chance to play, so Jam Parlour is here to offer those guys some airtime. As defined by JB, The Jam Parlour experience is all about adopting an open-minded attitude, discovering some new talents, supporting the confirmed ones, exploring real underground musical genres walking away from the beaten paths and immersing one-self into inspirational musical journeys.

Overseas, The Jam Parlour didn’t go unnoticed either and the night was hosted a few times at prestigious underground clubs such as Oma in HK, Korner in Taipei or Savage in Hanoi.

JB
It wouldn’t be an easy task to put a sticker on JB’s musical style and that’s probably a good thing. When he considers DJing, JB thinks of eclecticism and endeavors to open up musical boundaries to embark the crowd on a new journey.

His sets are always a musical reflection of what his soul captures from the crowd and the vibe of the place. Eclecticism is the key and JB likes to blend all his influences when he builds his set. That’s why he is equally comfortable in building an effective warm up set as he is in delivering the quality driving tunes during peak time.

JB has been DJing for 12 years and has held the decks in Paris, London, Alicante and countless spots across Asia. In Singapore for over 10 years, he has humbly contributed to grow the local scene by founding The Jam Parlour series with guests such as Pablo Valentino and Cinthie and co‐founding the Doomph! gig with partners in crime Brendon P, Matty Wainwright and Stephen Day.

He has played in the most prominent venues like Velvet Underground at Zouk, Kilo Lounge, CE LA VI, Tanjong Beach Club, Cato, Oma & Kee Club (HK), Korner (Taipei), Savage (Hanoi) and established himself as a resident at various venues. He has held a 6 months bi‐monthly residency at the 5-star Montigo Beach Club resort on the Indonesian island of Batam. He has also played for various big events like the Formula 1 or fashion shows. JB was a regular host on the local internet radio Meshradio and was invited for a live set at Chris Ho’s Taste of Lush program on Lush Radio.

SCOTT WATSON / THE SUNCHASERS
For some people music is more than just a passion or occupation. For some people it’s a way of life and the reason for their existence. Scott Watson is one of those people.

As a respected DJ & Producer, the forefront of Scott’s mission over the last 16 years has been to educate as many people as possible on the music that inspires him. Whether it’s deep room house or shining colourful beach beats, his ever growing music collection Scott has music to cover every occasion.

After some brilliant feedback from well respected DJs and producers across the world, Scott understood that it was clear his music was sunkissed so he decided to create a new identity so that people had a clear understanding of the sound he wanted to portray. The new name is “The Sunchasers”.

Now with regular releases on some truly fantastic record labels such as King Street sounds, Rhemi Music, La Musique Fantastique and a whole bunch of other great house music labels the sunchasers have now established a solid input on the house music scene.

Understanding the success of Scott’s productions including his #1 Traxsource hit “Dance For Me”, has enabled him to spread his sound worldwide and have his music played by admirable DJ’s which include Kerri Chandler, Hernan Catteno, Golf Clap, Rhemi music and lots of other great names.

Now with almost 17 years of experience under his sunglasses, new opportunities for Scott seem to appear like rays of sunshine on a hot summer’s day.