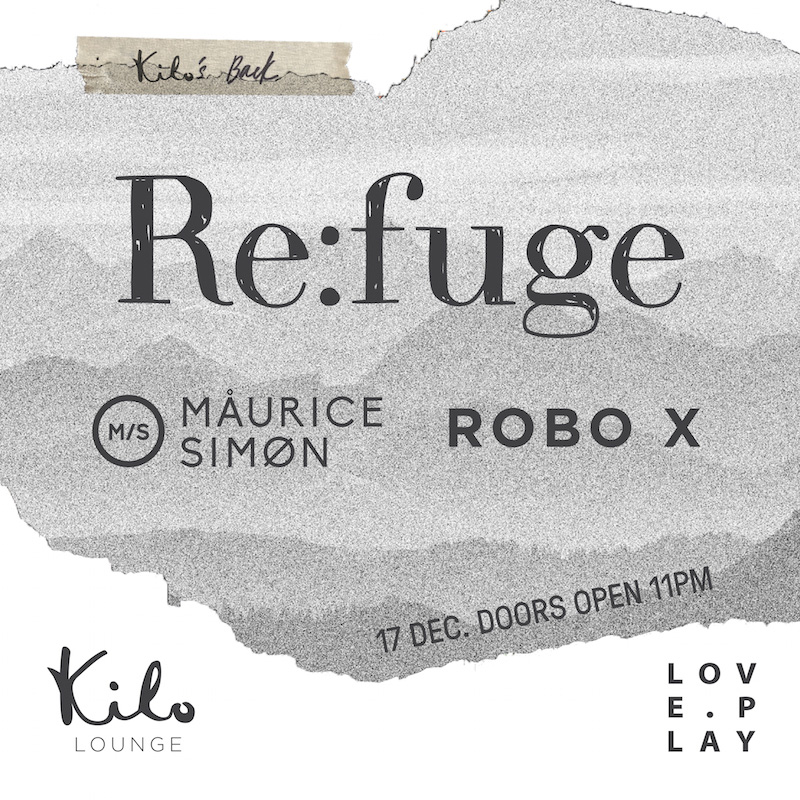 Presented exclusively by Kilo Lounge and created by resident DJ Maurice Simon, Re:fuge is a bi-monthly party dedicated to showcasing the very best of House and Techno with a soul.

Inspired by escapism as seen in both the natural world and in human traditions, Re:fuge represents a place of escape where the spirit and body enliven and renounce their hardships through the most replenishing electronic music that we know.

It is a party that has no agenda, that believes in people and in music and stands for a sense of community.

Replenish yourself, mute the noise, welcome to Re:fuge.

Resident DJ and creator of the Re:fuge house and techno series at Kilo Singapore, Maurice’s musical journey began with a discovery of the nu-jazz and broken beat genres pioneered by Jazzanova, Trüby Trio and 4Hero. He later ventured into the deep house and techno spectrum, inspired by time spent as a promoter for Ben Watt’s iconic London-based Buzzin’ Fly Records, and early releases put out by German labels Compost Records, Sonar Kollektiv and Dixon & Âme’s Innervisions. The hallmark sound of his rhythmic DJ sets is now rooted firmly in the very core elements of house, soul and techno, blending diverse genres and varying tempos with a warm, harmonic mixing style touched with overlapping melodies, bass lines and syncopated drum patterns. His versatility has seen him booked to perform the opening set for a diverse selection of international house music heavy-weights, including Âme, Marcus Worgull, The Revenge, Dave Seaman, Andre Crom, Sei A, Rainer Trüby and Till Von Sein.

A presence on the DJ circuit in Singapore since 2008 and a Heineken Green Room Music Ambassador, Maurice has performed at leading underground dance music venues across South-East Asia including Velvet Underground, Zouk and Kyo (Singapore), Koh and Jenja (Bali), Pisco Bar and Under9 (Kuala Lumpur), Hide & Seek (Jakarta), Mustache (Bangkok) and on the regional festival circuit at Singapore’s ZoukOut (2013, 2016), Ultra Singapore (2016) and Thailand’s Wonderfruit (2015).

Robo x is the Founding Member of Love.Play Radio, Co-Owner of Karotz Clothing, a Producer and a DJ.

His current musical inspirations are all big actors on the underground-music world stage—Innervisions, for one, owned by none other than Dixon and Âme, who are dedicated to always keeping their music and parties simply about the music. Another large inspiration is Berlin-based record label Maeve, founded by Irish boys Mano Le Tough, The Drifter and Baikal. Their sounds embody underground, and Robo x has a special resonance with the Drifter, who always manages to draw in sounds from various genres. Lastly, the infamous Talaboman, whose music always finds its way into his sets.

His music cycles through emotions, and the synth actions, escalating arpeggios and sinister basslines are his signatures. Simply put, Robo x plays music because he loves it. He has the ability to sway you with his well curated sets that will take you somewhere out of this world.