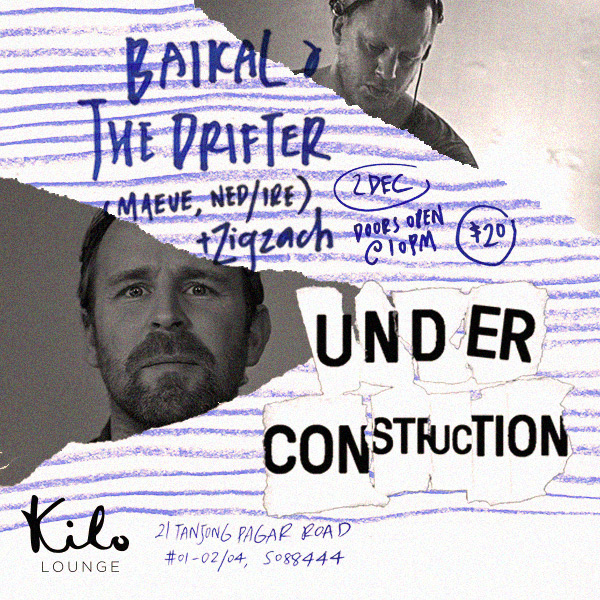 Almost there, but not quite—still, we know everyone’s been waiting for such a long time for the return of Kilo Lounge, and we can’t contain our excitement either. In the spirit of the very first Kilo Lounge, we’re throwing our second series of UNDER CONSTRUCTION parties over the weekend so you can get a preview of our new, raw space—not 100% there yet, but still great enough to have a good party—to get you by until our official opening at a date that will be announced soon.

Baikal resides in Berlin and makes multi-layered electronic music for the heart, mind, and feet—preferably all at the same time. He’s done this on the first release for Maeve (a joint venture with Mano Le Tough and The Drifter), as well as for remixes of Ian Pooley for Innervisions and Isolee for Tamed Musiq.

The success of these first releases led to high demand for tracks and remixes, filling up his release schedule for the coming year and beyond. He has a preference for the driving deeper shades of house and techno, and says that it’s first and foremost about the groove and being able to lose yourself in that vibe.

Baikal believes that the music itself, and the abstract experience and the emotions it provokes, should tell enough of a story to entertain you as the listener—the persona behind the artist is of lesser importance.

The Drifter is Mark Flynn, an Irish producer, DJ and singer. He grew up dabbling in different musical pursuits, from bands and choirs to folk and traditional, and a love for electronic music was born from his ventures into Dublin nightlife. A move to Berlin ensued soon after.

He released his first solo work, the ‘Lovers’ EP on Permanent Vacation in late 2012. His own vocals on the EP caught the attention of some of his peers, resulting in him recording vocals for Jacob Korn, Slow Hands, Erdbeerschnitzel, Good Guy Mikesh & Filburt, and Baikal. Further remixes for Woolfy vs. Projections, Uma, Ships and Slow Hands side project Male
Madame have made him one to watch.

The Drifter’s DJ style, like his productions, definitely leans towards the hypnotic, melodic and emotive side of electronic music, no matter what genre he is playing, be it House, Techno, or Disco. He learned his craft from DJing in bars and clubs, some of which he ran. One such nightclub was Passion Beat, which he ran in Berlin for over 3 years with his buddy Mano Le Tough.

He also runs the record label Maeve together with Mano and another close friend, Baikal. All three have a shared passion for deep emotive music, which he will be bringing to Kilo Lounge.