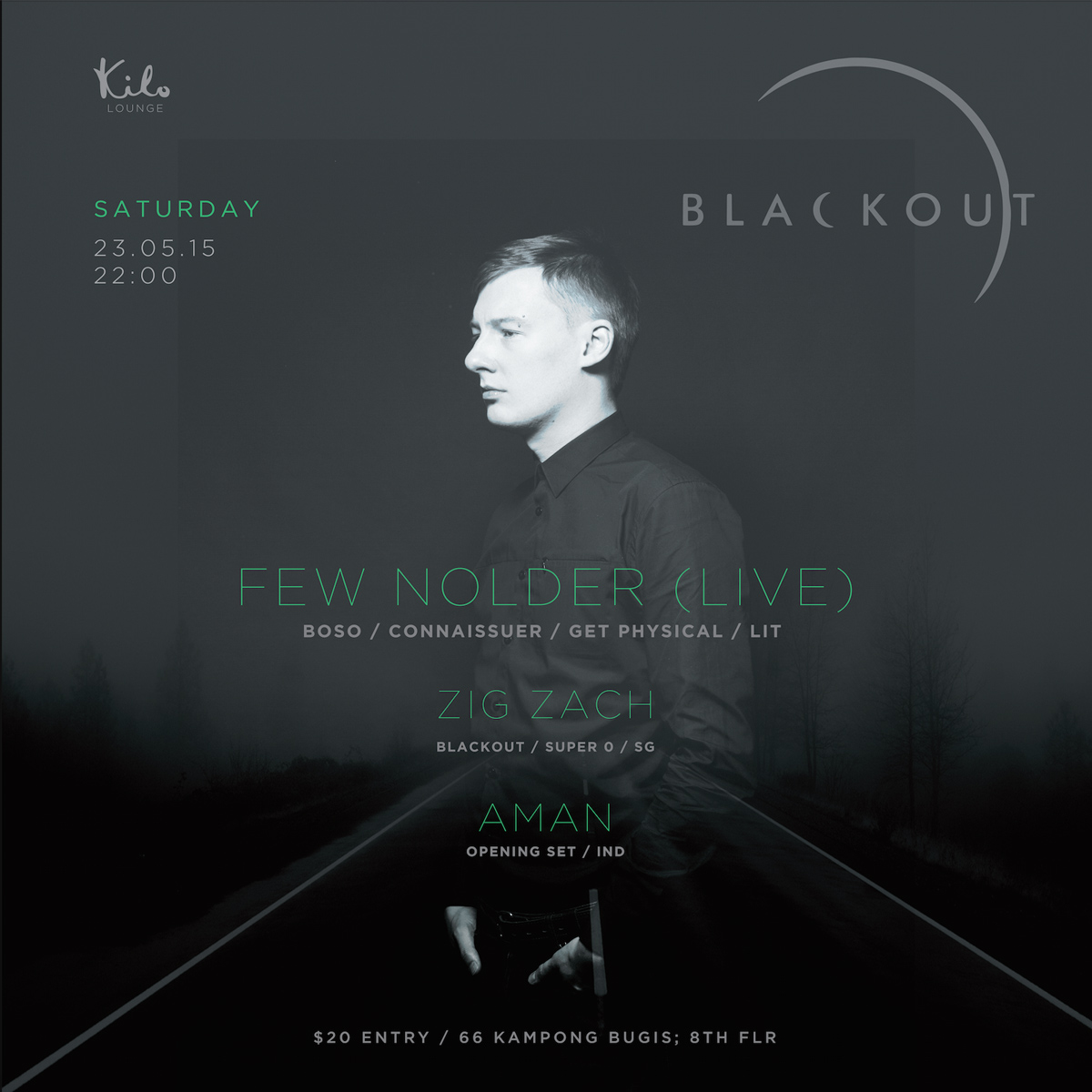 If you haven’t heard of this guy Few Nolder…. you really should start checking him out NOW! We are a huge fan of his productions and we play alot of his stuff whenever we get the chance to. Another talented and rising star in the music scene!

Releasing tracks on some of the top labels in the dance industry like Get Physical Music , Connaisseur Recordings…. and not to forget, his fellow Lithuanian country men, Mario Basanov Music a.k.a  Ten Walls very own label…. BOSO!!

We are VERY VERY excited for this night!! This is gonna be QUALITY!!! You don’t wanna miss this one. 😉

Linas Strockis aka Few Nolder first emerged back in 2006 when Lithuanian label Partyzanai released his debut ‘Patterns EP’ a melting pot of black techno magic. This led to his next release ‘No Mo’ getting picked up by Mike Paradinas’ highly regarded Planet Mu and a debut self­titled album was soon to follow in 2009 to critical acclaim.

Among many exciting artistic projects, Linas has been involved in the XYZ Opera performance project (since 2010) where the most talented Lithuanian opera singers together with prominent electronic music composers/artists create a unique show with visuals. Linas also started a slow balearic disco project New Found Land in 2009, played synth in an electronic indie cabaret band Adomas & the Mittens in 2011 and recently co­founded a pop electronic duo Dunes of Gold

With live gigs throughout Lithuania and all across Europe, varied original productions (Boso, Connaisseur, Planet Mu, Silence etc) unexpected co­productions, genre bending remixes, and dynamic work with electronic operas and ballets – the last few years have been an adventurous ride. ‘Clouds’ should be the impetus to catapult Few Nolder onto the global stage

Zig Zach, better known for his Muay Thai fighting skills as a contestant on the international reality TV series: The Contender Asia, started DJing as a hobby which soon quickly turned into a second passion & career.

Since hanging up his gloves in 2011, he decided to focus on DJing. He began sending out mix tapes to Internet radio stations, and were selected by Proton Radio (US), Innervisions Radio (UK) and Sweat Lodge
Radio (Berlin).

His bookings have since grown from strength to strength, and is regularly playing in Singapore for top venues like Kyo, Kilo & Tanjong Beach Club and in Bali at the prestigious W Hotel, Metis Restaurant, Townhouse, Cocoon Beach Club & the legendary Maria Magdalena.

In 2014 Zig Zach and his partner in crime, Danny Fry (W Hotel Bali Music Director) started their own party night called BLACKOUT, which has been a huge success! His recent popularity in the scene has since earned him slots on the bigger festival stages of Godkitchen’s Mekanika / Freq’ender and as Resident DJ for local Techno festival Super 0.

Known for his versatility and talent to adapt his music to suit different venues without ever compromising his sound and style: Deep house, Tech-house, Minimal with a dash of Techno. From the chilled out sunset sessions to the late night after party, his sets will take you on an unforgettable journey!

AMAN (IND / SG)
Sound Cloud Link
Facebook Link
Hailing from India, AMAN is no stranger to the array of sounds and melodies that enchant his home ground. Since 2008 he delved deeper into the realms of electronic that led him to play deep house, techno, electronica to name a few. AMAN hosted a weekly radioshow called Tranquility Sessions on India’s best Electronic Music Radio Station: Tenzi FM. Tranquility Sessions aimed to showcase music from the many underground talents present today. AMAN had the privilege of hosting some of the biggest and most respected underground artists on his show such as Moonbeam, Airwave, Nikko Z, Praveen Achary, Cactus Twisters, Digital Mess, Sonic Union, PHM, Dinka, Michael Cassette and a few more. Having released music on Change Audio, Agara Music, Soundteller, Balkan Connection, 3rd Avenue, amongst many other notable labels there’s no doubt that as a producer, he’s willing to push his musical boundaries each and every time. His tracks have been supported by some top producers and artists of the industry.