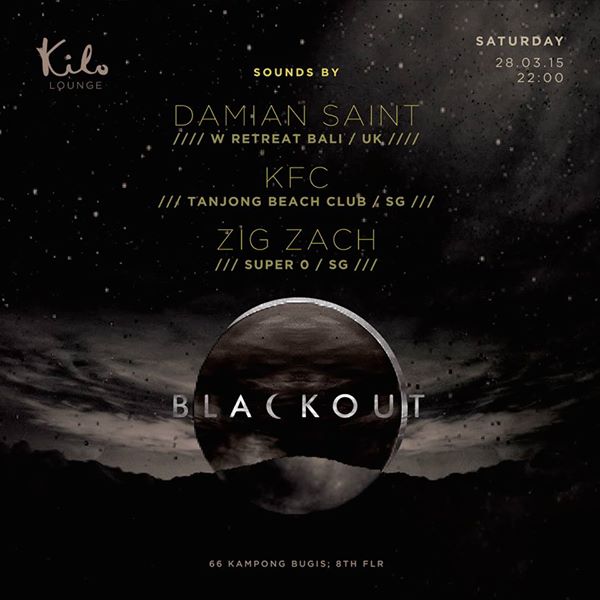 Venue: The 8th Floor at 66 Kampong Bugis, Singapore 338987
Time: 10pm till late
Dresscode: No Flip Flops!!! Guys, you will be sent away!
Cover Charge: No Cover, No Guest-list, No Hassel
Event Link Here

BLACKOUT Is back with another Monthly Installment at Kilo Lounge, featuring two DJ’s who are no stranger to the local music scene. Making their official debut at our venue on Saturday the 28th March.

We bring you Damian Saint Entertainment Director and Resident DJ for the W Retreat Bali who was also voted 2014’s Best Resident DJ by The Yak Magazine.

Damian will be playing alongside DJ KFC , Music Director for Tanjong Beach Club. Known for his funky and uplifting tunes on the sunny sands at TBC. This time we’ll see a different side to KFC’s sets as he takes on a deeper and techier sound for BLACKOUT.

NO COVER, NO GUEST LIST, NO HASSLE…JUST GET THERE EARLY TO AVOID DISAPPOINTMENT

The world of dance music often produces some of the most entertaining and colourful characters on this planet, DJ Damian Saint is no different… already one of the most prolific touring DJ’s throughout Asia, Damian’s international career began with him perched atop Ministry Of Sound’s first venture outside of the UK as resident in Bangkok, Thailand at the tender age of 21. From there it was another 7 honorary years of manning the helm at Ministry Of Sound with a stay in Taipei and finally settling in Singapore with resident duties that included playing along the likes of world luminaries Sebastien Leger, Nic Fanciulli, James Zabeila, and Pete Tong to name a few.

Time earned in Bangkok only led to more adventures… Invited to play across Thailand, Seoul, Jakarta, Bali, Vietnam, and Singapore, as well as under the Bacardi Blast label parties in India and Global Gathering in Malaysia, Damian warranted enough praise to host private parties for corporate movers GQ Magazine, FHM, Mercedes, and MTV’s Summer Gala Party all the while laying down his own brand of style and clout. This jaunt through every inch of Southeast Asia cemented Damian where he is today.

Respected and influenced by his peers, Damian Saint took the natural progression to production and sound design releasing his first single in 2008, Suntek, which was snatched up by Suesse Records UK and championed relentlessly by Carl Cox. By 2010, friendship mixed with business amicably when Sébastien Léger summoned Damian to Amsterdam to be his tour manager and official opening DJ. At this time Sébastien began mentoring Damian in the studio while together they knocked out crowds skipping from Tokyo to Sydney to South America, and everywhere in between, doing Leger’s Mistakes Music label party nights alongside now-heavyweights Format B, Super Flu, Jay Lumen, and Kaiserdisco.

If you can keep up, nowadays Damian Saint holds several residencies including Woobar at The W Hotel and Double Six Rooftop on the Island of Gods…Bali. Damian consistently leads nights into a technical and whirlwind bliss drawing influence from various forms of electronic dance music along with his own remixes and edits. With a number of production and remix projects in the pipeline, Damian Saint is already well on his way to becoming a household name amongst the house music community.

DJ KFC’s ‘no music, no life’ philosophy has taken him through the multitudes of musical genres with true verve and appreciation. Known for throwing different genres into his mixes but always
keeping the vibe and energy on the floor, his heart and soul shines through his feel good sets.

DJ KFC has helmed the decks at all the major clubs in Singapore and his eclectic flavour has spread across the region to Shanghai, Hong Kong, Bali, KL and Boracay . He has set the tone at exclusive parties for international fashion houses like Hermes, La Senza, Adidas Originals,
Jimmy Choo, Coach, Jaeger LeCoultre Baume et Mercier and for auto giants like Audi, Mercedes Benz Mclaren and Stuttgart Auto.

He has played at various festivals including Womad and F1 Rocks and was invited to play at the launch of the very exclusive Kee Club and Alfred Dunhill flagship store in Shanghai. He has also featured at the Gilles Peterson Worldwide Sessions for three years running (2008 – 2010). He ended a very busy 2010 schedule playing at the 10th Anniversary Zoukout Music Festival, one of the biggest annual dance festivals worldwide.

The 2011 calendar was a pretty exciting one for DJ KFC. From playing events like the David Foster and Friends Concert after parties, Louis Vuitton special in-store events, the Incase x Andy Warhol showcase, to various launch parties for the likes of Tangs, Nokia and DBS. He also had the honour of being a guest at the Pushin’On 5th Anniversary jam, the THEM JAM Festival and the opening of the Singapore Biennale 2011.

Currently a mainstay DJ of the Lo & Behold group, DJ KFC holds weekly residencies at Loof and OverEasy as well as monthly sunset sessions at the Tanjong Beach Club.

In 2014 Zig Zach and his partner in crime, Danny Fry (W Hotel Bali Music Director) started their own party night called BLACKOUT, which has seen a huge success in a short period of time! His recent popularity in the scene has since earned him slots on the bigger festival stages of Godkitchen’s Mekanika / Freq’ender and as Resident DJ for local Techno festival Super 0.

Known for his versatility and talent to adapt his music to suit different venues without ever compromising his sound and style: Deep house, nu-disco,tech-house, minimal with a dash of techno. From the chilled out sunset sessions
to the late night after party, his sets will take you on an unforgettable journey!