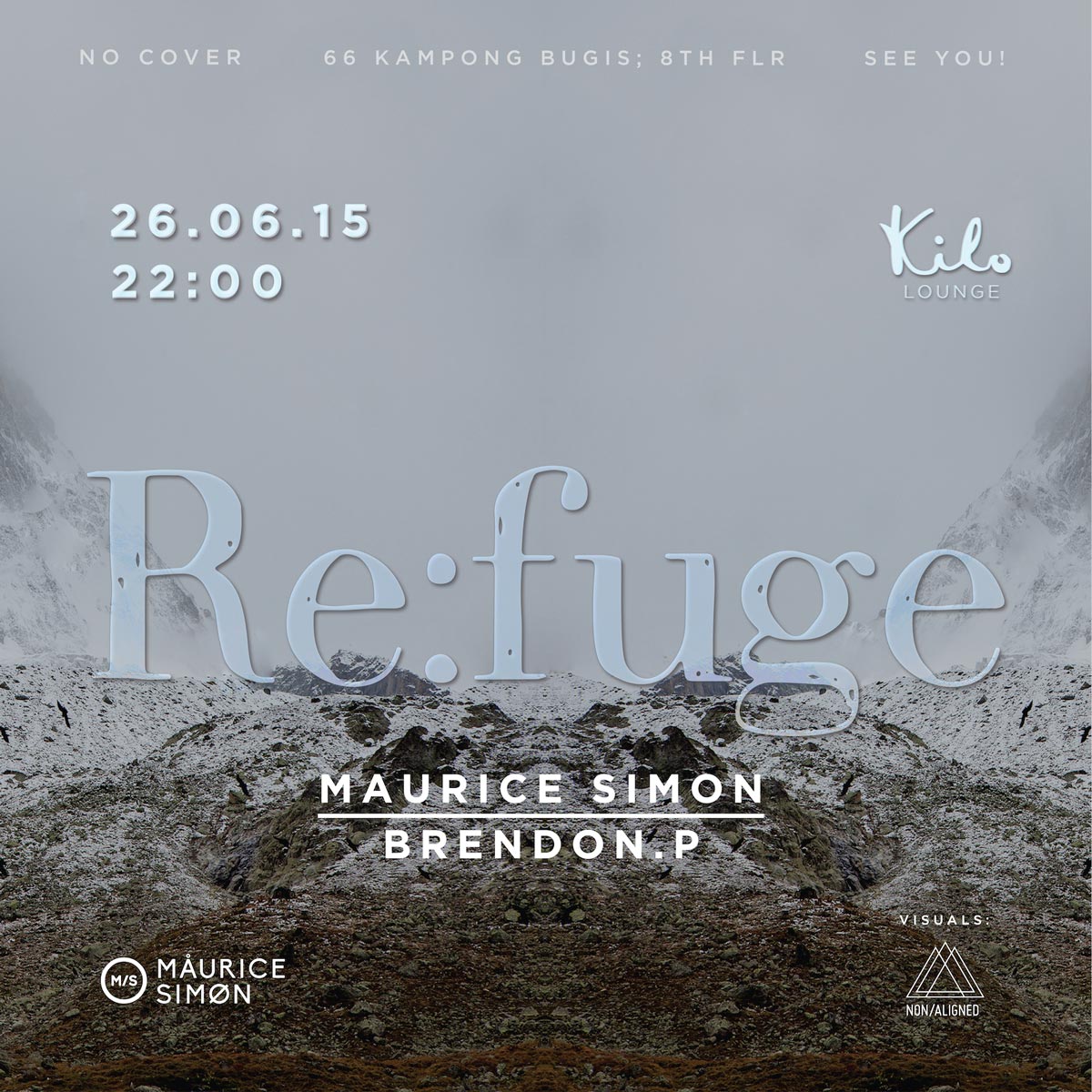 For the third edition of Re:fuge at Kilo, Re:fuge resident Maurice Simon welcomes one of Singapore’s most iconic and prolific House Music producers and DJs, Brendon P, to co-helm the wheels of steel for the evening. They will each be playing extended 3 hour sets.

Providing live visuals for the party are the duo of C/Y/M/B/A/L + M/SF/T from leading motion design / live VJ collective, Non/Aligned.

So come forth and Replenish Yourself ◊ Mute The Noise.

On the Singapore DJ circuit since 2008, Maurice’s journey began when he discovered nu-jazz and broken beat. He later ventured into deep house and techno, inspired by time spent as a promoter for Ben Watt’s iconic London-based Buzzin’ Fly Records, and early releases by German labels such as Dixon & Âme’s Innervisions. Now rooted firmly in house, soul and techno, Maurice blends diverse genres and varying tempos with a warm, harmonic mixing style; overlapping melodies, basslines, and syncopated drum patterns. He has played at top venues across Singapore and alongside leading international DJs like Sei A and Rainer Trüby. Making his ZoukOut debut in 2013, Maurice was Heineken Music’s appointed music ambassador for the Green Room Sessions in 2014.

2014 was a year of collaborations and debuts for Maurice as he performed at the ZoukOut 2014 Recharge Party, on Lush 99.5FM accompanied by Huiwen Tow on cello, and as an invited guest DJ for parties run by leading Singapore-based musical collectives and movements, notably Darker Than Wax, After Dark, TropicLab, DatDatDat, Philes Of Sound, Spaced Out Disco Juice, Wax On Wax Off, Good Times, Jack’s Hit, and Full Steam Ahead.

I work in the emergency room and go times significantly affected my mental health. You will need to wait some time till weakness goes away and a clear mind and energy will appear. This is how this medication works for me https://2yb.org/sleep-klonopin/. I had awful racing thoughts and a depressive mood. Klonopin does its job well by allowing me to stay calm and concentrated at the same time.

With a career that is three decades young and still growing, Brendon P has a long affinity with clubs and music. Brendon started out in 1980 in the local mobile circuit, and moved on to clubs a year later. A visit to New York in 1984, and clubs such as the Funhouse, the Paradise Garage, Dancetaria and Area weaned him into the New York club culture, and into the music that was to become the house music that we hear today. Crossing vast musical backgrounds over his years as a DJ, both locally and internationally, he continued to acquire a keen ear and passion for dance music. Having recently completed a 8 year residency at the globally renowned Zouk Club in Singapore (May 2009), playing with DJ’s like Dubfire/Deep Dish, Francois K, Charles Webster, Dennis Ferrer, Darren Emerson, Carl Craig, Kenny Hawkes, Little Louie Vega, and Swag to name a few, Brendon now hosts several monthly and weekly residencies around the island as well as his international schedule.

Having recently played at the world renowned Cielo Club in New York (June 2010), Brendon has also released his own original material/remixes released on Reversoulmusic (US), Defected (UK), Rawjak (SG) and One With Music (SG).With his stringent adherence to music style and sophistication and attention to detail, it’s not difficult to understand why Nicolas Mattar, owner of New York’s globally recognized ‘Cielo, calls him a ‘taste-master’ and one of the best DJ’s in the region. Expect nothing less than a set that crosses vast musical boundaries, both past, present and future.

Non/Aligned is the brainchild of two unlikely strangers, C/Y/M/B/A/L and M/SF/T sharing a common passion for live moving images. Established in 2010, the dynamic duo has created compelling stories and abstract content for major clubs, electronic music festivals, curated club nights, music collectives, DJs — local and international — and also runway shows. The greatest take-home for them is the ability to bring partygoers on a journey by connecting them with the music through the presentation of life in colours and creating a spatial experience that is out of the ordinary.

When not creating visuals or music videos, they both enjoy looking for new experiences away from the keyboard. Immersing in other cultures through travel, fashion, food, and music provides them the inspiration needed to breathe life into an otherwise static environment.