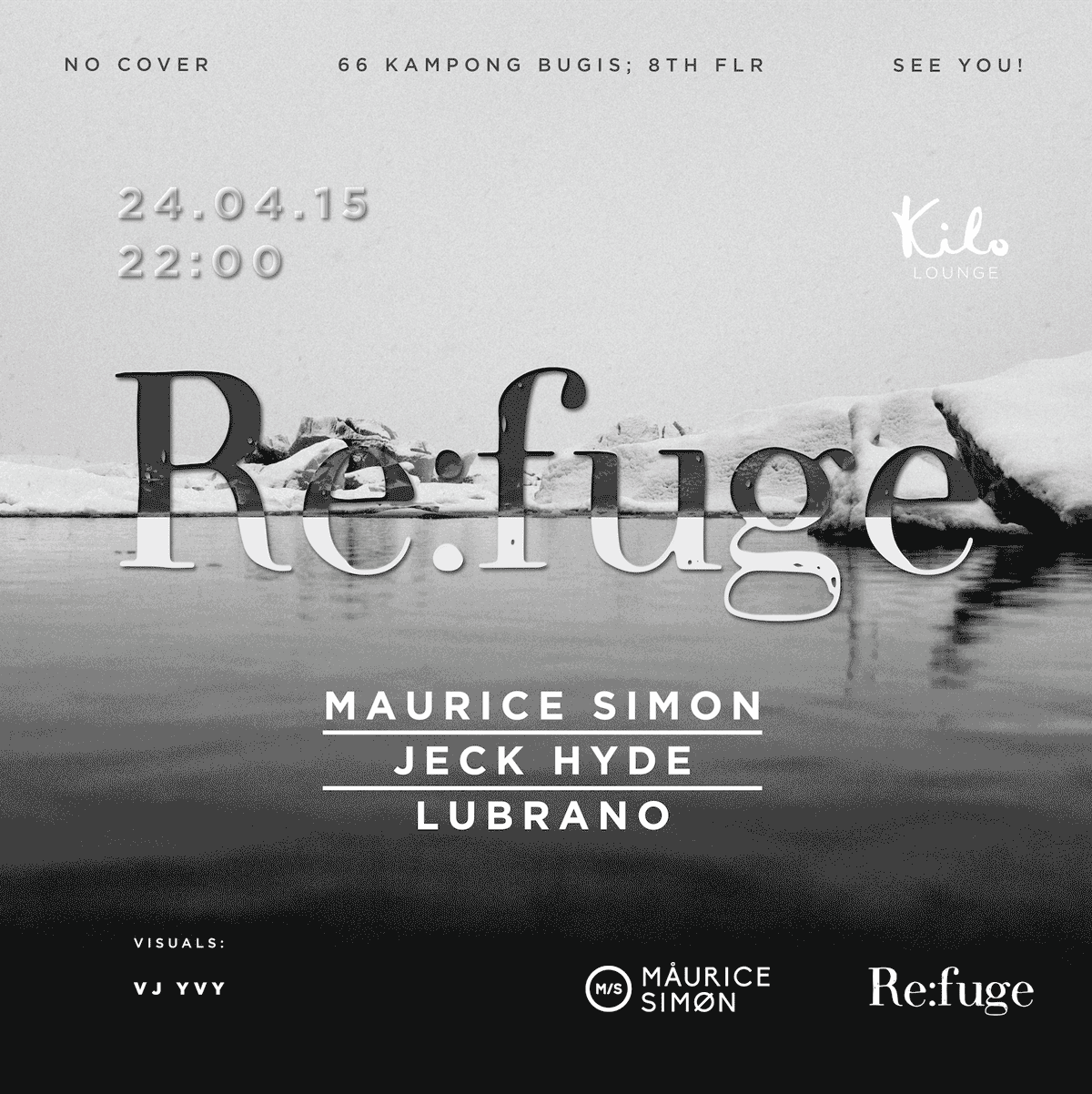 Presented by Kilo Lounge and resident DJ Maurice Simon, Re:fuge is a party series dedicated to showcasing the very best of House and Techno with a soul, paired with compelling live visual elements. It is a party that has no agenda, that believes in people and in music, and stands for a sense of community. It is a party that respects the dance floor because the dance floor never lies. Past guest performers for Re:fuge have included Mr. Has, Cats on Crack and Non/Aligned.

For this second instalment of Re:fuge at Kilo, Re:fuge resident Maurice Simon returns this time with the formidable French duo of Jeck Hyde and Lubrano (aka Dhakka).

Providing live visuals for the party is rising motion graphics talent, VJ Yvy, who has been hand-picked by Maurice to make her debut for Re:fuge at Kilo.

So come forth and Replenish Yourself ◊ Mute The Noise.

On the Singapore DJ circuit since 2008, Maurice’s journey began when he discovered nu-jazz and broken beat. He later ventured into deep house and techno, inspired by time spent as a promoter for Ben Watt’s iconic London-based Buzzin’ Fly Records, and early releases by German labels such as Dixon & Âme’s Innervisions. Now rooted firmly in house, soul and techno, Maurice blends diverse genres and varying tempos with a warm, harmonic mixing style; overlapping melodies, basslines and syncopated drum patterns. He has played at top venues across Singapore and alongside leading international DJs like Sei A and Rainer Trüby. Making his ZoukOut debut in 2013, Maurice was Heineken Music’s appointed music ambassador for the Green Room Sessions in 2014.

2014 was a year of collaborations and debuts for Maurice as he performed at the ZoukOut 2014 Recharge Party, on Lush 99.5FM accompanied by Huiwen Tow on Cello, and as an invited guest DJ for parties run by leading Singapore based musical collectives an movements, notably Darker Than Wax, After Dark, TropicLab, DatDatDat, Philes Of Sound, Spaced Out Disco Juice, Wax On Wax Off, Good Times, Jack’s Hit and Full Steam Ahead.