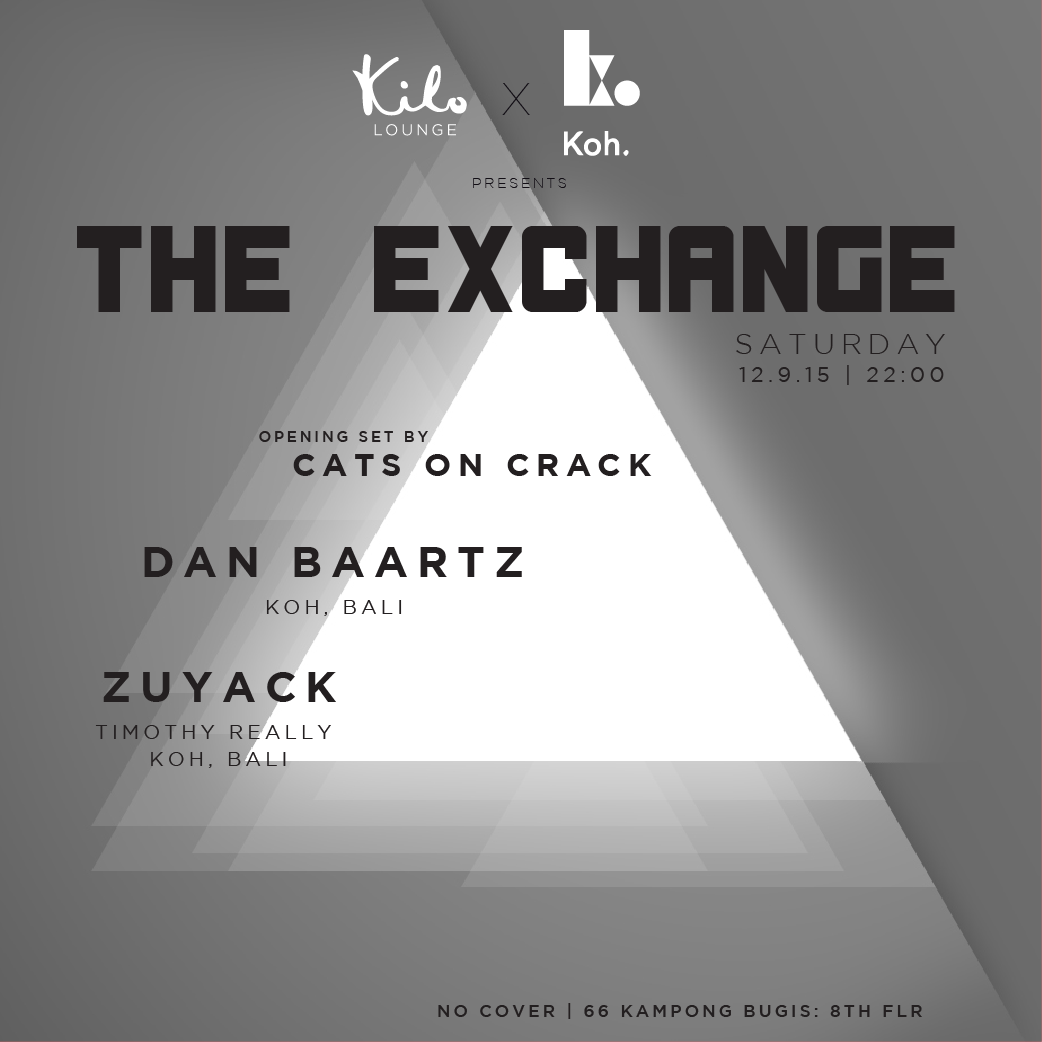 Kilo Lounge is stoked to join forces with our friends from Koh Bali to bring you The Exchange.

For this first edition, we have Koh’s resident DJs Zuyack and Dan Baartz bringing you a taste of Bali’s newest underground club, with an opening set by Cats On Crack to warm up the dancefloor.

Kyoto-born Zuyack started DJing after being influenced by his brother and the overwhelming psychedelic rave movement while growing up in Osaka. Zuyack is an offspring of the second summer of love that happened in the late ’90s in Tokyo.

In 2008, he joined “Timothy Really Production”, a Tokyo-based label, booking management, art direction and party planning team. Zuyack has played at major clubs such as Maria Magdalena, Mint, Jenja, as well as a few reputable parties in Jakarta and Yogyakarta. In 2015, his track record as a DJ earned him a residency at the newly opened underground club Koh in Bali.

His sound could be described as techno and house with touches of hypnotic & minimal sounds, creating a story across wide and deep latitudes, evolving to and from low-end hypnotic worlds. Once you are turned onto his magic, you will be tuned in to a musical journey which will keep you glued to the dance floor.

A product of Sydney’s ever-evolving club scene, Dan Baartz began playing in his home city at the age of 18, performing in some of its most prolific venues just in his first year. It didn’t take long before Dan’s original productions made their way into the very scene they were inspired by. As the scene evolved, so did Dan’s personal tastes and he had soon made a complete transition from his Electro beginnings to the deeper, more sophisticated House stylings that separate his productions today.

Since making the transition, Dan has held numerous residencies and guest spots at Sydney’s premier parties and venues including S.A.S.H., Musik Matters, Strange Clouds, Bad Apple, Moonshine, High Tide and Sub Bass Soundscapes Events just to name a few, sharing the stage with the likes of John Digweed, Inxec, Hot Since 82, Hal Incandenza, Small People, Chaos In the CBD, and countless others over the
years.

While being based in London, Dan had the opportunity to absorb inspiration from a scene that is considered to be one of House music’s Meccas. Whilst there he had the opportunity of supporting AndHim, SuperFlu and Joe Goddard at XOYO, one of Londons most iconic venues and was also featured on local Hoxton radio station MeatTransmission.